A way to survive. 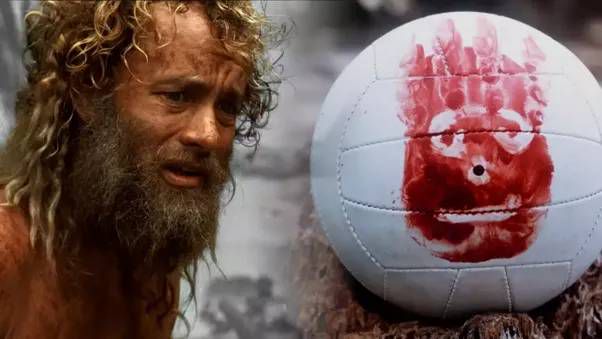 When my daughter told me for many years ago about Tom Hanks and his Mr Wilson in his film "Cast away " she never imagined that she'll personalize Mr wilson one day .
The film is about Chuck Noland,  the pilot who worked at FedEx, whos airplane crashed above an isolated island.
He survived this deadly crash together with few packages that were aimed to be delivered to their owners.
In order to survive, he was forced to open many of these packages , so he migt find something useful.
In one of these packages he found a ball, but he had no idea what to do with it.
He was totally isolated , and he had no one to talk to.
One day when he was trying to make fire, he hurted his hand.
He was bleeding and angry at the same time, and it happened that the ball was just beside him, and since he had unbearable pain , he grabbed the ball to stop the bleeding.
The miracle was already there. His bloody hand created the face of Mr Wilson.
Now he is not alone anymore.
Now he can talk to Mr Wilson all the time about everything.
It was the only and the most important social contact he had.
My wonderful daughter and I were amazed of the whole story and the ending of the film.
Now, my plane didn't crashed and I am not in isolated island, but yet I relate my contact with my kids to Mr Hanks contact to the World during his unwillingly stay in the island.

But the difference between me and Tom Hanks is that he had no possibility to contact his family and tell them that he is still alive.

Now , since my kids are real persons , and our blood bond is far more stronger than the bond between Tom Hanks and his fiktive new friend Mr Wilson,
and since I can use this technoloy to hopefully get in touch with them, and for surviving the absence of the social Contact with my kids, I hanged the pictures of my kids on the walls of my house, and my conversations with them has been in daily bases, just like Tom Hanks.

I share with them all the joy & pain I feel  within my heart.
I share with them my success and my growth.
I share with them my new stories, and I tell them how much I miss them, and I tell them about my Partner , and how much she loves them.
The four Wilson's and I will reunite one day.
The pictures will still hang there with one empty place to a new one.
A new picture of the Five of us will join the collection, and hopefully the ending of our separation won't be the same as Tom Hanks separation from his Family.
I believe that my current Wilson's going  to get back there real names one day, and I live for that day !
Posted by Alain Safa at 09:56